All membership slots are filled - and our forums are closed.

On our FB page, you don't have to be a caul bearer to join and ask questions! Sweet Dreams (Dreaming Of Snow White And The Seven Dwarves)

"Maria Szantho was born on July 31st, 1897 in the city of Szeged which is in the south part of Hungary. She was born with a caul. According to the Hungarian tradition anyone born with a caul will have a lucky life. Indeed, she had an extraordinary life, gifted in arts, and achieved fame and international appreciation and honour. Her paintings are well known at the best galleries and auction houses, and are valued parts of any collection."

"JONES, FRANK ALBERT (ca. 1900–1969). Frank Albert Jones, black artist, son of Edward Jones and Sarah Clark, was born at Clarksville, Texas, around 1900. He never attended school or learned to read or write, and was completely self-taught. He spent his early years in the Red River County area, where he supported himself working at odd jobs. When he was a small child his mother told him that he had been born with a veil over his left eye, and that this veil would enable him to see spirits. According to a widespread African-American folk belief, people born with the veil or caul (part of the fetal membrane) over their eyes have the power to see spirits and communicate with them. Those who have this power are sometimes referred to as "double-sighted." When Jones was about nine years old, he began to see spirits. He compared his double-sightedness to looking through a hole into the spirit world. Throughout his life he continued to see spirits, which he called "haints" or devils, in many disguises, including dogs, birds, clocks, and men and women of all nationalities. Though Jones's only generally known art is drawings done in prison during the last eight years of his life, he said he made his first "devil" drawing at the age of ten. Early drawings (circa 1930) have been found."

to read the article in its entirety, visit:

Liberace, (May 16, 1919 – February 4, 1987) world famous for his flamboyant lifestyle and skills on the concert piano, was born with a caul. His family believed that the caul endowed him with genious and an extraordinary future.  Liberace also had a twin who died at birth.

After his death, Liberace's piano was purchased by 1990s pop star Debbie Gibson.  Here is her story...

"Albert Bigelow Paine, her (Lillian Gish) 1932 biographer, puts her birth date in 1896, not 1893, on the first page of his work, as Lillian instructed. Paine thought this forthrightness very brave of her, and entirely consonant with her admirable character: 'You are not in a class with those who are willing to sail under false colors.' Over the subsequent decades, Lillian's year of birth was variously reported as 1896 and 1898. It was not reported at all in her 1969 autobiography. And as late as 1987, when she was going on ninety-four, she still indulged in the creative chronology that actors often think their prerogative. 'I was born ten weeks before the beginning of the twentieth century. I'm not 90 years old, as many people seem to think, but I am as old as the century.' That neat calculation subtracted seven years from the august total.

Paine relishes the stories of Lillian's childhood — how she preferred playing with her sister, Dorothy, to her rag doll, her taste for castoria cured only when her aunt half-filled the bottle with cod-liver oil, the recurrent nightmare of a masked face appearing in a window. Since marital separation did not fit Paine's idealized portrait of the girl who loved to say her prayers and adored her mother, he deals only briefly and reticently with the most important event of little Lillian's life: the breakup of her parents' marriage. Lillian herself always attributed the failure of the union to the extreme youth of the couple, and the father's immaturity and dreamy nature."

-Lillian Gish
Her Legend, Her Life
By CHARLES AFFRON

"Edwin Thomas Booth (November 13, 1833 – June 7, 1893) was a famous 19th century American actor who toured throughout America and the major capitals of Europe, performing Shakespearean plays. In 1869 he founded Booth's Theatre in New York, a spectacular theatre that was quite modern for its time.[2] Some theatrical historians consider him the greatest American actor, and the greatest Hamlet, of the 19th century.[3] However, he is today often remembered as the brother of John Wilkes Booth, the man who assassinated President Abraham Lincoln."

"In an interesting coincidence, Edwin Booth saved Abraham Lincoln's son,[5] Robert, from serious injury or even death. The incident occurred on a train platform in Jersey City, New Jersey. The exact date of the incident is uncertain, but it is believed to have taken place in late 1864 or early 1865, shortly before Edwin's brother, John Wilkes Booth, assassinated President Lincoln.

Robert Lincoln recalled the incident in a 1909 letter to Richard Watson Gilder, editor of The Century Magazine.

The incident occurred while a group of passengers were late at night purchasing their sleeping car places from the conductor who stood on the station platform at the entrance of the car. The platform was about the height of the car floor, and there was of course a narrow space between the platform and the car body. There was some crowding, and I happened to be pressed by it against the car body while waiting my turn. In this situation the train began to move, and by the motion I was twisted off my feet, and had dropped somewhat, with feet downward, into the open space, and was personally helpless, when my coat collar was vigorously seized and I was quickly pulled up and out to a secure footing on the platform. Upon turning to thank my rescuer I saw it was Edwin Booth, whose face was of course well known to me, and I expressed my gratitude to him, and in doing so, called him by name.

Booth did not know the identity of the man whose life he had saved until some months later, when he received a letter from a friend, Colonel Adam Badeau, who was an officer on the staff of General Ulysses S. Grant. Badeau had heard the story from Robert Lincoln, who had since joined the Union Army and was also serving on Grant's staff. In the letter, Badeau gave his compliments to Booth for the heroic deed. The fact that he had saved the life of Abraham Lincoln's son was said to have been of some comfort to Edwin Booth following his brother's assassination of the president." 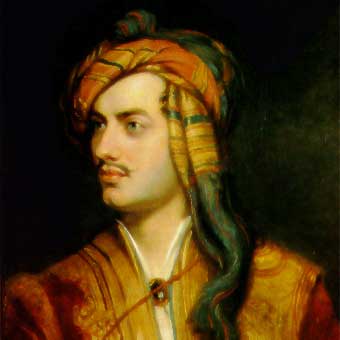 I had a dream, which was not all a dream.

The bright sun was extinguish'd, and the stars
Did wander darkling in the eternal space,
Rayless, and pathless, and the icy earth
Swung blind and blackening in the moonless air;
Morn came and went--and came, and brought no day,
And men forgot their passions in the dread
Of this their desolation; and all hearts
Were chill'd into a selfish prayer for light:
And they did live by watchfires--and the thrones,
The palaces of crowned kings--the huts,
The habitations of all things which dwell,
Were burnt for beacons; cities were consum'd,
And men were gather'd round their blazing homes
To look once more into each other's face;

"George Gordon, better known as Lord Byron, was born with a caul and a club-foot on January 22, 1788, in London. Throughout his life he was very sensitive about his foot and flew into a temper when attention was called to it. In order to not be looked down upon or pittied over his hanicap, Byron acted with exaggerated masculinity. He and his family were poor throughout his young life and during this time, they all lived in Aberdeen, Scotland where Byron attented grammer school. At the age of ten, when Byron's uncle died, George Gordon became the sixth Lord Byron. He inherited the Nottingham estates and his ancestral home of Newstead. It was at Nottingham that Byron was subjected to the maid May Gray who mistreated the boy thorugh drunkenness, beatings, neglect, and sexual liberties. This abuse was not stopped early enough to protect the boy from the psychological injury in the premature initiation into sex-play."

"J.G.Farrell (1935–1979) was born with a caul, long considered a sign of good fortune. Academically and athletically gifted, Farrell grew up in England and Ireland. In 1956, during his first term at Oxford, he suffered what seemed a minor injury on the rugby pitch. Within days, however, he was diagnosed with polio, which nearly killed him and left him permanently weakened. Farrell’s early novels, which include The Lung and A Girl in the Head, have been overshadowed by his Empire Trilogy—Troubles, the Booker Prize–winning Siege of Krishnapur, and The Singapore Grip (all three are published by NYRB Classics). In early 1979, Farrell bought a farmhouse in Bantry Bay on the Irish coast. “I’ve been trying to write,” he admitted, “but there are so many competing interests–?the prime one at the moment is fishing off the rocks… . Then a colony of bees has come to live above my back door and I’m thinking of turning them into my feudal retainers.” On August 11, Farrell was hit by a wave while fishing and was washed out to sea. His body was found a month later. A biography of J.G. Farrell, J.G. Farrell: The Making of a Writer by Lavinia Greacen, was published by Bloomsbury in 1999."

-The New York Review of Books

LOOKING THROUGH A HOLE INTO THE SPIRIT WORLD:
Lynne Adele pays tribute to Frank (Albert) Jones whose 'devil houses' were a powerful reflection of his own incarceration. 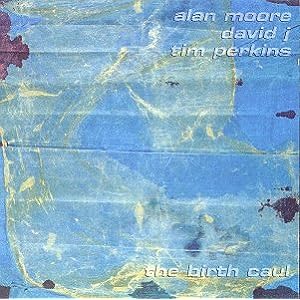 "Subtitled "A shamanism of childhood" , THE BIRTH CAUL is a hypnotic evocation of all the stages of life, regressing back from adulthood into the very womb. The piece was inspired by Alan's discovery of a carefully wrapped birth caul in his mother's belongings after her death. The liner notes describe a caul as "the ancient English name for the residual membrane from the amniotic sac that envelops the head of some newborn babies. A traditional belief holds that if the caul is kept (usually by peeling it away onto paper) it can be used as a talisman that will protect the child from death by drowning for a lifetime". Alan's introductory note follows:

"The birth caul is a bell-flower membrane blossomed from the amnion that masks the newborn head. Its presence is occasional. Its purpose obscure, a vestment signaling involvement in some silent and unfathomable elite; some sect of Trappist embryos that dream the Absolute beneath these wan, translucent hoods.

"The birth caul is an evocation, both in poetic and ritual sense, of our first landscape and the forces that inform it. Alloying spoken human text with landscaped sound and ritual enactments, it attempts a vortex; winds an inspired dream from the site and date of its unique performance back towards the drowned, pellucid territory of our origins.

"The birth caul, gradually unfolded, is a fragile tatter, a lost map to be restored with these faint tracings, lines as thin and tentative as veins. The flaking membrane charts a monstrous and forgotten continent, each vivid splash of motherhood an archipelago. It is a crumpled and mismanaged postcard from a vanished state, its message in an antique hand not readily deciphered.

"The birth caul documents a personal Atlantis, a preverbal dreamtime, a naive shamanic state rich with abandoned totems; unremembered dance and fire; the florid signatures of mediaeval demons half-apparent through the strange-attractor loops of scribbled chalk upon a playground wall. A dark without a doll."